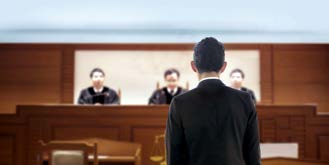 Ever have those bad dreams where you’re supposed to give a presentation or speak in public, but you haven’t prepared at all? It’s the stuff of nightmares for a reason, and yet that’s almost exactly the situation I found myself in, years ago, at the first law office I ever worked for.

You can imagine my excitement to be working for a bona fide law firm. I’d worked very hard to get there — law school, passing the bar, and more studying than anybody should ever have to deal with. When day one rolled around, I was nervous but also excited. I knew it wasn’t going to be like a TV show law job, but even if I was stuck at a desk for a while, I knew I’d learn the ropes and eventually get the chance to prove myself in court.

When one of the partners approached me and shook my hand, I figured he was going to welcome me and tell me where to sit.
“You the new attorney?” he said. I told him I was. He then stuffed a large folder into my hand. “Great,” he said. “This is the client’s file. You’ve got court in a few hours.” I must have misheard him, right? That’s what I thought, anyway. But as he turned around and disappeared into the hustle and bustle of the busy office, I realized this was no misunderstanding — and when I asked around, I realized they weren’t playing a joke on the new guy, either. I really did have court that day.

You can imagine the amount of cramming I did in the next few hours; it put studying for the bar to shame! I’d never seen that case before. Heck, I’d never even been in front of a judge before. What were they thinking? Was this trial by fire? Looking back on it now, I suppose it was a bit of that. And I see the value in onboarding someone that way. But now that I’ve onboarded new attorneys myself, I think it was mostly just disorganization. They needed someone in court, all the other lawyers were busy with more important things, and I was the only person there who could do it. I can’t fault them for that, although I’ve made sure to never put my own firm in the same position.

So, how was that first court appearance? Well, let’s just say that I was nervous … But despite that, it actually went pretty well. I got to argue in front of the judge, go back and forth with the opposing counsel (whom I later stayed in touch with), and I did a good job for my client. I’d call that a good outcome, considering it was literally a bad dream come true!

There was one interesting result, however: I found myself loving the experience. Being in court was like nothing else I’d done. I had to be smart, tough, quick on my feet, but also know when to back down and defer to the judge. It was my first day at a real law firm, and I realized I was doing exactly what I was meant to do. Many attorneys don’t actually like to go to court, which means I recognized the advantage I had in that arena early. To this day, my firm doesn’t back down or shy away from going to trial, as long as it’s in the client’s best interest.

Like I said earlier, I’ve now guided a few new attorneys through their own “first days,” and while I do believe in tossing someone in the deep end to see if they can swim, I also see the value in having a lifeguard nearby. I’ve never put anybody through quite what I endured my first day, but I’m grateful for the experience all the same. As the Whisler Law Firm starts yet another new year, I look back on that experience and all the others that have shaped the lawyer I am today.

“We hired The Whisler Law Firm to help us with an insurance claim. They were incredibly professional and thorough. They really understood the situation and were able to guide us to a satisfactory settlement to help us with our unfortunate circumstances. By holding our hand throughout the process, my wife and I felt very comfortable. Thank you for your help!

Although the coronavirus put a damper on the fast-growing electronic scooter industry, scooters are once again rising in popularity here. After a crackdown by authorities on all kinds of transportation, we weren’t sure how quickly companies like Lime would be able to resume their operations. They’ve assured the government that the scooters don’t present a higher transmission risk than is acceptable — but virus transmission is just one of the many hazards these vehicles present to their riders and the public at large.

We get it: These little transports are a lot of fun for users, and their interfacing with phones and on-the-go apps make snagging one a cinch. But they’re also hazardous: According to USA Today, around 40,000 scooter injuries were reported in the United States over the last five years or so, a period in which injuries also doubled in number. Remember, this is not your kid’s toy: Electric scooters go fast — faster than their foot-propelled counterparts — and there’s no way to guarantee riders will wear a helmet.

Even if they do, scooter riders can still strike pedestrians, who almost certainly won’t be wearing protective gear, and represent a traffic hazard if used unsafely. No classes or safety courses are required to operate an electric scooter, and their speed makes riders more likely to take risks they wouldn’t take on foot.
E-scooters operate in a varied environment as well. They can cruise down sidewalks and zip down alleyways, and their small size makes it easy to weave between road barriers and enter vehicle-free areas where people simply aren’t expecting to encounter anything moving faster than walking speed. Of course, a large rock or a patch of beach sand is all it takes to send the scooter flying —along with the rider and anybody who might be nearby.
Who is at fault when this results in injury? That question changes from case to case and requires experienced attorneys to parse. Often, the riders themselves can be held liable, but if the accident happened in the roadway, then drivers could be at fault, as well. If the scooter malfunctioned, then the liability could rest with the company that made or distributed it.

The very things that make scooters popular — ease of access, utility, and ubiquity — are also what makes determining liability so hard. Our firm is experienced in all manner of personal injury, and we’re here to help you answer that question — or any other injury question you might have. Please don’t hesitate to give us a call.